The Houston Astros take ALCS lead against the New York Yankees in a Game 4 victory on Thursday night. The Astros dampened the spirits of the Yankees by defeating them 8-3. This left the sellout crowd of 49,067 at Yankee Stadium deflated and speechless.

However, for the Astros, it looks like they are on the brink of entering their second World Series in three years. Looking at their record of 3 games to 1, the Astros take ALCS lead. Furthermore, with Justin Verlander on the mound tonight and Gerrit Cole in their line-up for Game 7, it looks like the series could be over for the New York Yankees. And Cole has been having a pretty stellar season this year. He is 19-0 with an ERA at 1.59 in his last 25 starts. 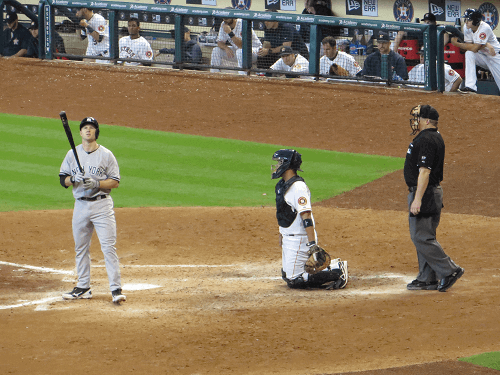 The Yankees were completely dominated by the Astros. It was only the second time in Yankee postseason history – which is 404 games – that they gave up two, three-run shots in a single game. One was off starter Masahiro Tanaka and pitcher Chad Green. And it wasn’t like the Yankees didn’t have any opportunities to win, blowing the game open in the first inning. But they failed to show up.

It looked like Astros’ pitcher Zack Greinke was going to have a tough night. He started the game by walking leadoff hitter D.J. LeMahieu on four pitches. Then he subsequently walked three of the first six Yankees batters for the first time in his career. The Astros were ready to replace Greinke; all the bases were loaded. However, Gary Sanchez failed to shine, striking out on three pitches. When he finally hit for the first time in the sixth inning, it was too little, too late.

Currently, as far as performance goes in the American League Championship Series (ALCS), it will be a Washington Nationals vs. Houston Astros World Series. Firstly, the Houston Astros currently have what they consider to be the greatest teams in baseball history. And their 115 victories and counting seems to be evidence of the fact. In fact, they have managed to win postseason games with out their star players Verlander and Cole. The story of how the Astros take ALCS lead was expected.

On the other hand, the story of the Nationals getting to the World Series is one of a meteoric rise. Earlier this year, they were 12 games under .500 (19-31) and had the worst bullpen in baseball. My how they have grown.

However, judging by how strong the Astros are, facing them in the World Series will truly be a story of the underdog (Nationals) facing a titan (Astros).