According to mybookie.ag (as of October 3), in the Brighton vs. Tottenham EPL match, it looks like Brighton are the favorites to win this match on the moneyline bet.

Brighton vs. Tottenham will be this weekend’s English Premier League (EPL) match up. Tottenham will he hosted by Brighton at Falmer Stadium. They last faced each other in April 2019 at Tottenham where the home team won 1-0. Last season, the Spurs won both the matches against Brighton. 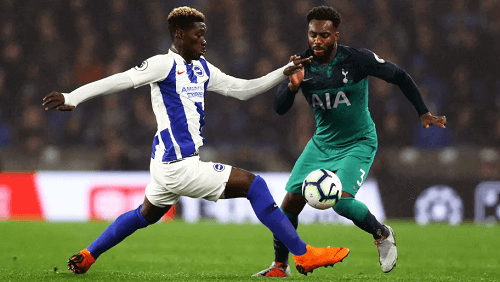 This year hasn’t been a good one for the away team. Tottenham have failed to perform, suffering a humiliating defeat at the hands of Bayern Munich. They lost 7-2 at home, which saw fans leaving the stadium early from embarrassment. Their defense lacked confidence and failed to stop Bayern’s blistering offense.

Brighton have also been experiencing a tough season, managing six points out of seven EPL games. However, the team isn’t afraid to fight and they’ve managed to get point from two of their last three EPL games. Furthermore, Brighton’s defense seems confident when playing at home. That could be their key to winning, or at least staving off Tottenham’s offense this weekend.

Currently, Tottenham ranks 6th in the EPL. However, with the way things are going, it looks like they’re going to fall down the ladder.

On the other side, Brighton is 10 positions lower than Tottenham, ranking 16th in the Premier League.

In the Brighton vs. Tottenham game this Saturday, one has to wonder if the Spurs will have regained their confidence to put up a fight. They looked shattered after Bayern’s whitewash. That said, Brighton lack a strong enough offense to score goals against Tottenham.

Watch highlights from the last Brighton vs. Tottenham match up.

For more odds on the latest soccer matches, keep it here at BestUSSportsBetting.com.

Learn more about the EPL: