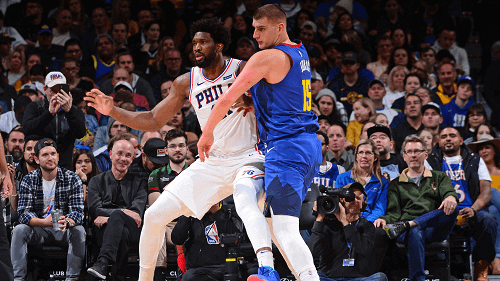 In tonight’s NBA game it’s the Denver Nuggets at Philadelphia 76ers. The Nuggets, who have a 14-7 record are playing the 76ers at the Wells Fargo Center in Philadelphia, PA. Denver’s coming off a 105—102 loss to the Brooklyn Nets; a very close game that came down to the wire.

Leading the Nuggets in their loss to the Nets offensively was Nikola Jokic who made 10 of 21 shots from the floor and made both foul shots, finishing with a double-double. He scored 24 points, and had 11 rebounds and 6 assists. As a team, the Denver Nuggets shot 40% from the floor and 43% from beyond the arc. What helped the Nuggets’ campaign is that they were able to shoot more 3-pointers (18) than the Brooklyn Nets (7). However, they were outperformed 18 to 12 from the foul line.

The Philadelphia 76ers are coming into tonight’s match with a 17-7 record and off a 110-104 win against defending NBA champions, the Toronto Raptors. Tobias Harris guided the 76ers to victory with 10 of 22 shots from the floor, made both foul shots, and scored a total of 26 points. Ben Simmons was an assist shy of a triple-double. He finished with 16 points, 11 rebounds, and 9 assists. The 76ers shot 50% from the floor and 44% from the 3-point range.

Let’s take a look at some key team stats first.

It seems like the Philadelphia 76ers are having a good run as they’ve won six of their last seven games. On the other hand, the Denver Nuggets have lost four of their last five games. We think that the 76ers will continue with their winning streak against the Nuggets.

Eager to see what you can expect from the Denver Nuggets at Philadelphia 76ers game? Watch highlights from the last time the Nuggets played the 76ers.

Get the Best Odds Here

For more of the latest US sports betting news, keep it here at BestUSSportsBetting.com.
Our Score
Our Reader Score
[Total: 13 Average: 3.6]