Run on a 1 1/8 mile (or nine furlongs) dirt track, the Breeders’ Cup Distaff race is a Weight for Age thoroughbred race. The race only accepts up to 14 runners with up to seven automatic berths. In 2007, the series developed The Breeders’ Cup Challenge which is a series of races in each Breeders’ Cup division. A winner of the defined races means they are automatically entered into main race in November – a “Win and You’re In” type of system.

For US bettors interested in taking part in the betting action on the Distaff, they can find great Breeders’ Cup Distaff odds at the following sportsbooks.


What you’ll find in this Breeders’ Cup Distaff guide:

Placing a bet on the Breeders’ Cup Distaff requires you to keep in mind not only each horses’ statistics and performance record. You also have to bear in mind their Weight for Age, or WFA scale.

Developed in 1860 by Admiral Henry Rous, the WFA scale factors the horse’s age, weight, and the distance of the race. Because the Distaff race is run by both young fillies and older mares, this scale needs to be used to level the field between Breeders’ Cup Distaff contenders. The older a horse, the more stamina it has when compared to a younger horse at the same weight. 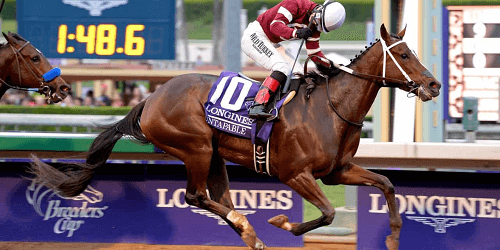 To make informed and successful bets on the Distaff race, take into consideration the following tips:

For more Breeders’ Cup Races, check out the following guides:

Trivia on the Distaff Race

Below we have some interesting trivia on the Breeders’ Cup Distaff race.