The Breeders’ Cup Filly and Mare Turf is the premier female horse racing event in America. It’s a grade one thoroughbred race on turf and it was added to the Breeders’ Cup in 1999. Mares and fillies from North America and Europe participate in the race, and winning runners set themselves apart from the rest.

The race is a known as a Weight for Age Thoroughbred for three-year olds and older. The winner of this race gets to take home a cool $2 million and bragging rights as the best female runner in the industry. Let’s take a look at what the race is about, their top entries, and some betting tips on the race.

The Breeders’ Cup is one of the most illustrious horse races in America. This means that betting on this turf race is bound to have some great odds and betting lines. For some competitive odds, check our recommended horse racebooks below.


What you’ll find in this Filly and Mare Turf guide:

The Filly and Mare Turf is a leg of the Breeders’ Cup that was inaugurated in 1999. Open to fillies and mares that are three-years old and older. It’s held annually at US races across the country at race tracks that can accommodate either a 1 ¼ mile or 1 ⅜ mile left-handed race. These are at the following tracks: 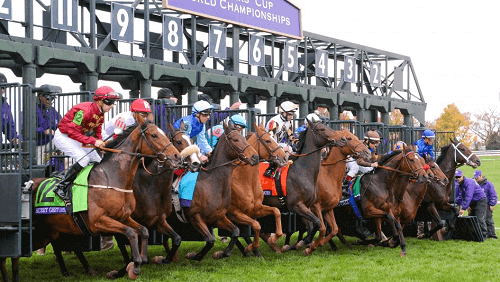 As mentioned, entries for this leg of the Breeders’ Cup are from North America and Europe. Therefore, this creates a great North America vs. Europe subplot. Fillies and mares coming in from Europe are known as the best turf runners in the world. So, some bettors often go for the European runners more than ours.

For more Breeders’ Cup Races, check out the following guides:

Here’s what you need to pay attention to when betting on the Breeders’ Cup Filly and Mare race:

Remember not to chase your losses and to manage your bankroll – never spend more than 10% of your budget on a bet.