As a historical American institution, the Pimlico race track is host to some of the US’ most notable races. Based in Baltimore, Maryland, Pimlico is most famous for hosting the Preakness Stakes race, which draws in hundreds of thousands of spectators every year. Nicknamed “Old Hilltop”, the Pimlico race track has a long history in the US. Pimlico is a flat one-mile oval horse racing track surrounding a seven-furlong (7/8 mile) turf oval. The Pimlico’s stadium can hold over 120,000 people. Officially opened in 1870, the track has survived a lot of major historical events. The Pimlico race track endured the Great Fire of Baltimore in 1904, the Great Depression of the 1930s, and several Baltimore riots.

Currently, the race track has been under the ownership of The Stronach Group since 2011. According to 2014 figures, the track collects about $181 million in live bets at the track.

Let’s take a look at horse racing betting at the Pimlico and some of the racing action US bettors can take part in online.

To take part in events happening at the Pimlico race track without having to go down to the track itself, find great sports betting options at our recommended online sportsbooks.


What you’ll find in this Pimlico race track guide:

The racing season at Pimlico runs throughout May until the end of Spring. It has 22 races during its season, with the most notable races being the Preakness Stakes, Black-Eyed Susan Stakes, Dixie Stakes, and Pimlico Special. Other races Americans can wager on at the Pimlico race track are: 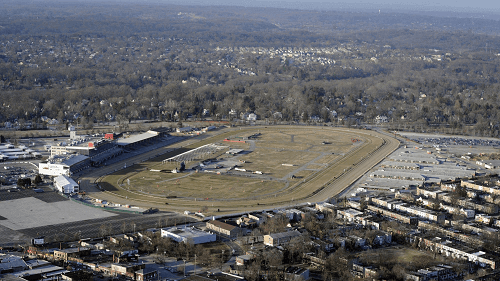 Best Free Picks for US Bettors

The Pimlico race track is known to favor horses with an early speed because of its tight turns. Commonly, this is one aspect horse bettors overlook when picking their runners. When picking horses for the major Preakness Stakes event, which is run at a mile and 1/16, keep in mind the distance. It ends up being too much for the sprinter/miler horses that end up in the race.

Furthermore, it’s easier to handicap races at the Pimlico, like the Preakness, because the field tends to be smaller. Also, runners in the Kentucky Derby tend to not run the Preakness, choosing to wait for the Belmont Stakes.

Other famous US race tracks:

Pimlico Results Over the Years

The most famous race at the Pimlico race track is the November 1, 1938 race between Seabiscuit and War Admiral. Watched by over 43,000 people, it was also made into the famous film starring Toby Maguire, Jeff Bridges, and Elizabeth Banks.

The race track also hosted the most watched sporting event in Maryland’s history. In 2007, the official attendance for the Preakness Stakes was at 121,263. Additionally, more than $87.2 million in bets were made.