Sunday’s NFL game will be Los Angeles Chargers at Tennessee Titans in an AFC clash. Playing at the Nissan Stadium in Nashville, the Chargers come in with a 2-4 record while the Titans also have a similar record. However, they do score lower in terms of power rankings, coming in at no. 28 compared to the Chargers who are at no. 25.

Both teams lost their previous matches, making it the LA Chargers’ second straight loss to the Pittsburgh Steelers. Likewise, the Titans also suffered their second straight defeat on Sunday at the hands of the Denver Broncos.

Los Angeles were behind 21-0 at the half and entered the fourth quarter at 24-0. They managed to rally 17 points, which include a pair of touchdown passes from QB Philip Rivers but they were too late resulting in a 24-17 final score. 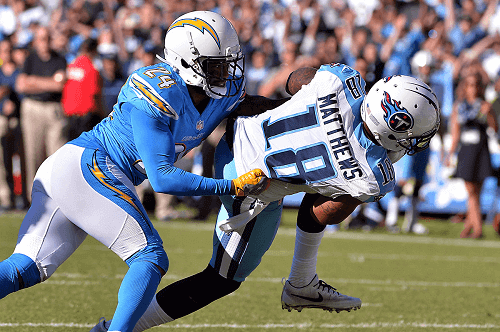 In its game against the Broncos, Tennessee only managed to gain just 204 yards against a strong Denver defense. Furthermore, Marcus Mariota was hit with three sacks and in the third quarter was eventually benched after throwing an interception. He only managed to throw for just 63 yards and one interception. Replacement QB for the Mariota, Ryan Tannehill, had four sacks.

So, when considering who to bet on this coming Sunday, here are a few stats to keep in mind.

So, both teams are experiencing a two-game losing streak. The LA Chargers need to keep a focused attack that’s able to last long enough in the game, unlike their performance in their last two games. On the other hand, the offense needs to find a way of keeping drives going long enough to score. Their defense is about as good as it can get.

Predictions for the Los Angeles Chargers at Tennessee Titans game is that it will be a boring low scoring spectacle. We’re betting on the Titans winning with our best bet being on Under 21-17.

Watch highlights from the last time the Chargers played against the Titans in 2018.

More of the latest US sports news:
Our Score
Our Reader Score
[Total: 13 Average: 3.6]