In tonight’s NBA games it’s the Los Angeles Lakers at Chicago Bulls. The leaders of the Pacific Division will be playing at the United Center in Chicago, Illinois with the home team looking to improve their record and ranking in the Central Division. 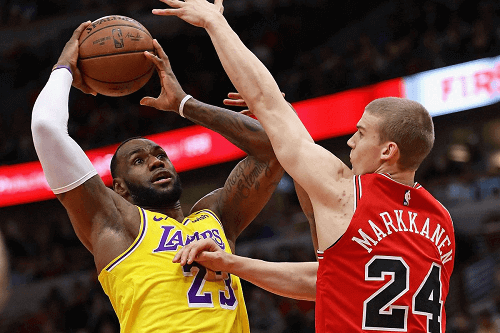 The Los Angeles Lakers are coming in strong and are keen on extending their winning streak to six consecutive games. Currently, their season record stands at 5-1. In their most recent game on Sunday, the Lakers beat the San Antonio Spurs 103-96. LeBron James and Anthony Davis are proving to be a formidable force on the court, with Davis leading Los Angeles in points with 25. He also recorded 11 rebounds and 2 assists against the Spurs. Meanwhile, James scored 21 points, and recorded 11 rebounds and 13 assists. Additionally, Dwight Howard has been enjoying a great comeback, scoring 14 points and 13 rebounds.

On the other side of the court are the Chicago Bulls. They’re coming into the game with 2-5 season record after losing to the Indiana Pacers 108-95. In their most recent game, the Bulls’ leading point scorer was Zach LaVine with 21 points. Wendell Carter Jr. leads the rebounds with 10 and also scored 20 points. Even though he was in the game against the Pacers for 27 minutes, Tomas Satoransky recorded 9 assists.

Firstly, let’s take a look at some important stats that will help us make our predictions.

So, with all of this in mind let’s get into the prediction making. Even though the Bulls are capable of scoring, they’ll be struggling with their defense. The Los Angeles Lakers have a strong offense line, led by David and James.

Our pick: we’ll be putting our coins on the Los Angeles Lakers win spread bet. They tend to cover the spread 83.3% of the time.

Find the best Los Angeles Lakers at Chicago Bulls below.