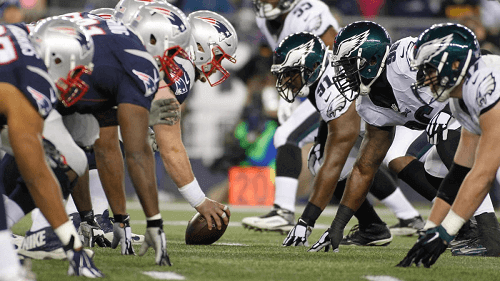 It’s the New England Patriots at Philadelphia Eagles in this interconference clash. Both teams are coming off a bye this week so they’re rested and eager to see some action.

The last time New England Patriots played, they suffered a shocking 37-20 defeat at the hands of the Baltimore Ravens. However, they still have one of the best season records in the NFL at 8-1. In their match against the Ravens, quarterback Tom Brady completed 30 of 46 attempts for 285 yards and threw one touchdown and interception. The leading Patriots rusher was James White who added 38 yards on 9 carries and a score. In his first touchdown for New England, wide receiver Mohamed Sanu made it to the end zone on a 4-yard pass from Brady. But they were outgained 372 to 342 yards.

In their last game, the Philadelphia Eagles won against the Chicago Bears 22-14. They were guided by running back Jordan Howard. He rushed for 82 yards on 19 carries and a score. Then, there was quarterback Carson Wentz who was 26 of 39 for 239 yards and a touchdown. The Eagles also managed to outgain the Bears 373 to 164 yards.

Will Philadelphia beat the Patriots or will New England get revenge for their 2018 Super Bowl LII loss?

Let’s take a look at some key team metrics before we make our predictions.

With all this in consideration, we are finding it hard to bet against the Patriots. They rarely ever suffer back-to-back losses and we don’t think Philadelphia’s defense will be able to keep Brady and their offense away from the endzone.

Watch highlights from the last time the it was a New England at Philadelphia Eagles match up.


For the latest US sports news, keep it here at BestUSSportsBetting.com.