The NBA regular season kicks off with the New Orleans Pelicans at Toronto Raptors. The Pelicans will be meeting the defending NBA champions at the Scotiabank Arena in Toronto, Ontario.

Even though it may be the first game of the season, the Pelicans have something to prove playing against the current league champions. They’re hoping to replicate their 4-game win streak start they had in 2018’s NBA season. 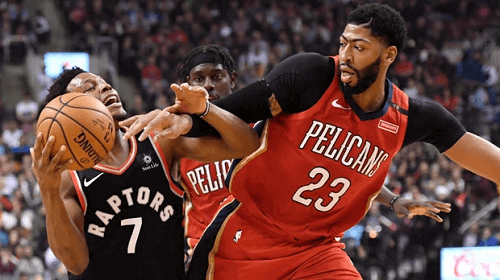 On the other side of the court, the Toronto Raptors have a different line-up to last year’s championship line-up. With Kawhi Leonard now playing for the Los Angeles Clippers, other Raptors players will have to fill the gap. However, they managed to go 17-5 without Leonard on the line-up so it’s a possibility they may not miss his presence on the court.

Let’s take a look at some stats for the upcoming game:

So, let’s take a look at some New Orleans Pelicans at Toronto Raptors predictions:

Watch the highlights from the Pelicans at Raptors game:

Check out other top US sports news: