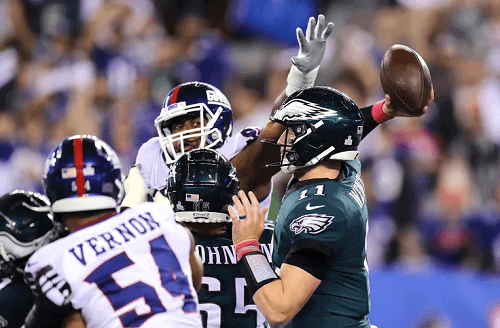 Week 14 will end off with the New York Giants at Philadelphia Eagles in a good NFC East NFL matchup. Both teams have had very disappointing seasons, and at this point, there is no chance of the Giants making it to the playoffs. The Eagles still have a chance of doing so though. The G-Men come into this game off a loss against the Green Bay Packers that saw them lose starting quarterback Daniel Jones to injury (although this may be a blessing in disguise given his trouble giving away the ball throughout the season).

The Eagles, who were poised to have a good season at the start of the year, come into this game in need of a big win. Especially, after losing against the Miami Dolphins last week – the team thought to be the worst in history at the beginning of the season. They will also need to ensure that they win every game en route to the playoffs if they are to make it through. Much criticism has been levelled against quarterback Carson Wentz, but will he be able to lead the team to a win over the struggling Giants?

Well, before we have a look at the predictions, here are some stats regarding the Giants and Eagles players need to consider:

With all this said, here are our betting predictions for New York Giants at Philadelphia Eagles:

Watch highlights from the last time the Giants played the Eagles.

Get the Best Odds Here!