The Buffalo Bills from New York are notorious for having the longest streak of any NFL team for not making the playoffs. The team was created in 1960 and played in the American Football League (AFL). They joined the National Football League (NFL) in the great AFL-NFL merger for the 1970 season. The Bill are part of the American Football Conference (AFC) East division and are the only NFL team to play their home games in NY state. Their home field is at New Era Field, Orchard Park, New York. The Buffalo Bills are trained by head coach Sean McDermott.

Read on for more on the Buffalo Bills’ performance history in the league and where to find the best odds for betting on the Bills.


What you’ll find in this Buffalo Bills guide:

As mentioned earlier, the Bills were formed in 1960 and joined the NFL’s AFC East division in 1970. They became the second team to represent Buffalo city in the league after the Buffalo All-Americans.

There is some rivalry between them and the other three teams in the division. Also, there have been an occasional and historical rivalries between the Bills and the Indianapolis Colts, Kansas City Chiefs, Tennessee Titans, Cleveland Browns, and Dallas Cowboys.

However, Buffalo’s most famous rivalry is with the Miami Dolphins. It became popular when the Dolphins beat the Bills at every single game in the 1970s from a NFL-record 20 game streak. The Bills managed to regain dominance in the 1990s but tensions are still present.

Their logo is a red Bison buffalo with their mascot being Billy Buffalo. They wear royal blue, navy, white, and red. 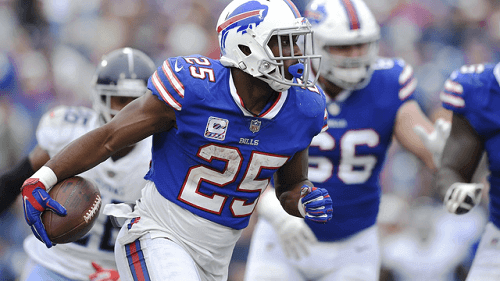 Let’s take a look at their performance in the AFC East division and NFL over the years.

Looking at the consistent failure to land in finals and even playoffs shows a team that’s on a downward trend. They even failed to make it past the wild card playoffs in 2017 after their last time being in 1999. Furthermore, their failure to clinch a divisional championship since 1995 tells us that the Buffalo Bills aren’t a team to be placing your money on. In the 2018 season, they came third in their division.