The Miami Dolphins are a National Football League (NFL) team from Miami, Florida. They are part of the American Football Conference’s East division with the likes of the Buffalo Bills, New England Patriots, and New York Jets. The Miami Dolphins play their home games at the Hard Rock Stadium in Miami Gardens. Being the oldest professional sports team in Florida, they are celebrated in the state.

Founded in 1966, they began playing in the American Football League (AFL) and joined the NFL in 1970 in the great merger. For most of their early history, they were coached by the most successful coach in pro football history, Don Shula. He has won the most games in professional football history.

For those looking for betting action on the Miami Dolphins, you’ll find some great odds at these sportsbooks that we’ve rounded up.


What you’ll find in this Miami Dolphins guide:

The team’s uniform colors are made up of aqua green, white, and orange. Their official mascot is T.D., the dolphin, who sports an aqua green Dolphins jersey.

The Dolphins have intense rivalries with the other three teams in AFC East division, especially the New York Jets. Furthermore, they have historical rivalries with the Tampa Bay Buccaneers, the Indianapolis Colts, Pittsburgh Steelers, and Los Angeles Chargers.

They made their first Super Bowl appearance in the 1971 season – Super Bowl VI – and lost the cup to the Dallas Cowboys. In 1972, the Dolphins managed to complete the NFL’s only perfect season, where they not only won all 14 of their regular season games and the Super Bowl VII cup. In 1973, they also won that season’s Super Bowl making then the first team to appear in three consecutive Super Bowls, and the second team to win back-to-back championships.

Also, the Miami Dolphins had the legendary quarterback Dan Marino, who became the most prolific passer in NFL history between 1983 and 1999. 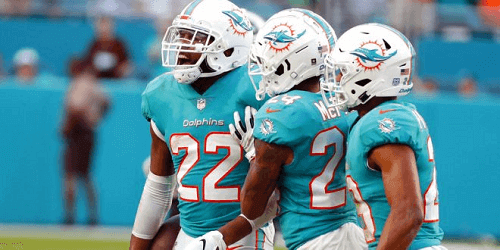 Betting Odds on the Dolphins