Based in the Greater Boston area, the New England Patriots are a National Football League (NFL) team. The Patriots are a legendary force not just in their American Football Conference (AFC) East division, but the NFL as a whole. They’ve been dominating the league over the past two decades and they’re showing no signs of slowing down. The New England Patriots are the current defending champions with their most recent win being the 2019 season Super Bowl. Furthermore, the Patriots have a record nine Super Bowl appearances, and tie with the Pittsburgh Steelers for the most Super NFL wins at six titles.

The New England Patriots call the Gillette Stadium in Foxborough, Massachusetts its home grounds. Founded in 1959, the team was known as the Boston Patriots until 1971 after it merged with the NFL from the American Football League (AFL) in 1970. The team’s current uniform colors are nautical blue, white, silver, and red. They have Pat Patriot, a solider from the American Revolution, is their mascot.

Anyone who has been a fan of the New England Patriots knowns that there’s an intense and bitter rivalry between the Patriots and the New York Jets. Some even consider it to be the most antagonistic relationship in the NFL. Both teams are in the same division but tensions were escalated with the swapping of head coaches throughout the years.


What you’ll find in this New England Patriots guide:

At a glance, the Super Bowl odds for the Patriots stand at +645 or 6-1 depending on which US sports betting site you’re betting at. This puts the team at the top of the list for winning the Super Bowl again. 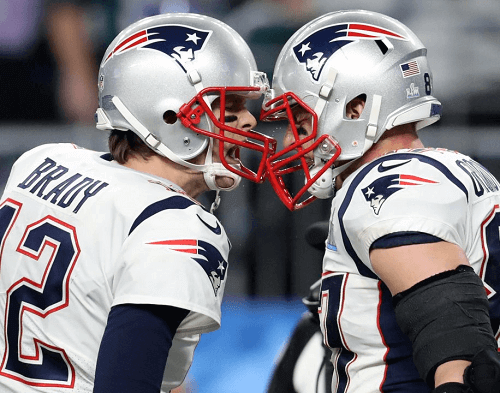 As mentioned above, the New England Patriots have been dominating the NFL. At the helm of their successful campaigns is Tom Brady who is one of the best players in professional football. Let’s take a look at the laundry list of the Patriots’ accomplishments over the years.

Playing in the AFC East, the New England Patriots have: