Established in 1959 as the Titans of New York, they were originally first members of the American Football League (AFL) before the 1970 merger with the NFL. They adopted the New York Jets name in 1963. The Jets were the first AFL team to beat an NFL club in 1968 in Super Bowl III. However, this is the only time the Jets have won a Super Bowl as well as their only Super Bowl appearance. The Jets share a division with the Buffalo Bills, Miami Dolphins, and New England Patriots.

Nicknamed the Gang Greens, the New York Jets sports gotham green, white, and black as their uniform colors. They are also one of four NFL teams to not have an official mascot.

The Jets have long running rivalries with all of the teams in their division. Let’s take a look at some of the rivalries with the team in the AFC East division:

Finally, there’s an intense rivalry between the Jets and the New York Giants. However, it has died down because they haven’t played against each other as often in the regular season.

We’ve compiled a list of some of the best sports betting sites for American players. Here’s where you’ll find competitive odds on betting on the New York Jets and other AFC East teams.


What you’ll find in this New York Jets guide:

The Jets have appeared in the playoffs a total of 14 times (including twice during the AFL days). They played their first Super Bowl in 1968, where they beat the Baltimore Colts. This has been their only Super Bowl win since. This makes them one of three NFL teams to win their only Super Bowl appearance. They’re also one of the teams with the longest droughts in the NFL. 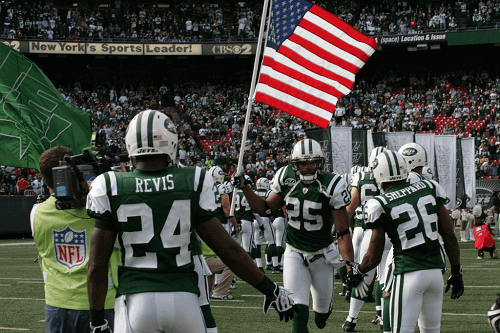 Looking at their NFL playoff appearances, this is how they have performed:

Betting Odds on the Jets

Since they’ve signed new head coach Adam Gase, the New York Jets are quite confident about dethroning the New England Patriots as AFC East champions. However, oddsmakers aren’t as convinced. The Jets are considered to have the best defense in the NFL, so it’s about keeping an eye on how they perform. The odds on the Jets have a 5/1 odds to win, while the Patriots are 2-7.