The Baltimore Ravens are a fairly young National Football League (NFL) team compared to other established teams. Founded in 1996, the Ravens were initially a part of the American Football Conference (AFC) Central division until 2001. The team then joined the likes of the Cincinnati Bengals in the AFC North division and have called this division home since. Their home ground is the M&T Bank Stadium in Baltimore, Maryland.

Baltimore Ravens history is quite colorful and filled with NFL controversy. They were created in response to Arthur “Art” Modell’s move to Baltimore after he failed to relocate the Cleveland Browns.

Furthermore, there was more controversy brewing in the NFL between owners and an alleged conspiracy towards Baltimore getting its own football team. Then-League Commissioner Paul Tagliabue and Washington Redskins owner Jack Kent Cooke apparently lobbied against the city as a potential home ground because of how close it is to Washington D.C.

It was even labelled by the Baltimore Sun as an “Anything But Baltimore policy”. Modell, who was facing financial woes, was enticed by Baltimore’s available funds and decided to base his expansion team there.

Another interesting aspect of Baltimore Ravens history is that the team name comes from Edgar Allan Poe’s famous poem The Raven. In a fan contest, which had 33,288 votes, they decided to honour Poe who lived for some time in the city and is buried there. Their mascot is a Raven named Poe and they sport a uniform with metallic gold, purple, and black.


What you’ll find in this Baltimore Ravens guide:

Looking at the changes of Baltimore Ravens Super Bowl, one of our top sports betting sites, MyBookie, puts this team in 16th position with +3300 odds of winning Super Bowl LIV. 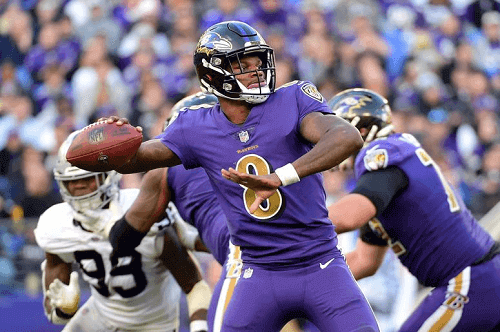 When it comes to the divisional championships, it looks like oddsmakers aren’t fairly confident that the Ravens will clinch any victories. Currently, the Baltimore Ravens odds to win the AFC North division are at +260 – placing then third out of four teams. The Ravens are at number seven with +1600 odds to win the Conference championship. They are competing with the New England Patriots and Kansas City Chiefs who are top-notch NFL teams.

Read more on the teams in AFC North division:

The Baltimore Ravens’ performances in the NFL may not be abysmal but they haven’t been dominating the league like other teams in the past. However, they are the only team to have a perfect record in multiple Super Bowl appearances and are known for their strong defensive plays. Let’s take a look at their accomplishments – and failures – over the years.

Playing in the AFC North division, the Baltimore Ravens have: