A member of the American Football Conference (AFC) South division, the Indianapolis Colts have been a National Football League (NFL) franchise since 1953. The Colts’ home ground has been the Lucas Oil Stadium since 2008. However, they haven’t always been based in Indianapolis, Indiana. When they were founded in 1953, they were based in Baltimore.

The official team colors are royal blue and white, while their mascot is an anthropomorphic horse called Blue. Their team logo is a horse shoe (which is also the symbol of luck).

They haven’t had any major rivalries with other NFL team, apart from the loose ones established between them and the teams in the Colts’ division. However, there is a more recent one with the New England Patriots. This one has been linked to the quarterback comparison between Payton Manning of the Colts and Tom Brady of the Patriots.

You’ll find the Indianapolis Colts in the AFC South division with teams like the Houston Texans, Tennessee Titans, and Jacksonville Jaguars.

We’ve rounded up some of the best sportsbooks with betting odds on the Colts.


What you’ll find in this Indianapolis Colts guide:

As a Baltimore-based team, the Colts appeared in the playoffs 10 times and won NFL Championships in 1958, 1959, and 1968. Also, they played in two Super Bowl matches winning Super Bowl V against the Dallas Cowboys. Then, in 1984, they migrated to Indiana. As the Indianapolis Colts, they’ve appeared in 16 playoffs, won the AFC Championship twice, with their most recent win being is 2014. They also won Super Bowl XLI in the 2006-07 season after beating the Chicago Bears.

Lately, the Colts have been experiencing difficult seasons. In 2017, they managed to post their worst season record since 2011. The Colts tend to hold a lead in the second half only to lose it by one point. This has cost their long-time coach Chuck Pagano his position, who has since been replaced by Frank Reich who wasn’t the team’s first choice. However, the Indianapolis Colts’ luck may be turning around with the return of their star quarterback Andrew Luck from an off season due to a shoulder injury. He’s considered to be one of the best quarterbacks in the NFL. 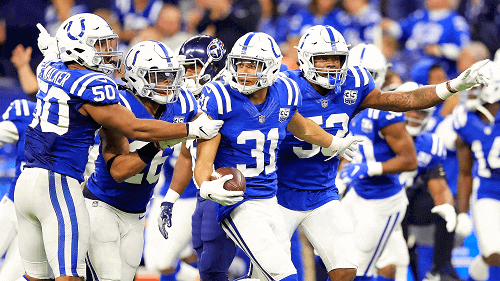 Read more on the teams in the AFC South division:

Betting Odds on the Colts

Because the Colts are still a work in progress, and having recorded losses throughout the years, most oddsmakers aren’t counting on them to make it past their division. At a glance, the odds on the Indianapolis Colts in 2018 weren’t favourable at all. Their odds of winning the Super Bowl were pegged at +6000, winning the AFC Championship was at +2907, and winning the AFC South divisions was at +570. After probably being bolstered by the return of Luck, the Colts came second in the South division behind the Houston Texans, and sixth in the AFC.

It remains to be seen what they will be able to pull off with a new head coach and healed star quarterback.