The Kansas City Chiefs are the only National Football League (NFL) team from Missouri. This means that they are a state treasure, with many Missourians gathering to watch when they play. The Chiefs are part of the American Football Conference (AFC) West division and call the Arrowhead Stadium in Kansas City their home.

The Kansas City Chiefs were founded in 1960 under the now defunct American Football League (AFL). After which, they moved to Kansas City in 1963 and became the Chiefs. During the big merger of 1970, they became part of the NFL and were placed in the AFC West division along with great teams like the Denver Broncos. They achieved a lot as an AFL team but, after becoming a part of the NFL, they’ve had a rocky time. Let’s take a look at the Kansas City Chiefs, their performance history, and betting odds.

Below are our top sports betting sites for betting on the Chiefs.


What you’ll find this guide on the Kansas City Chiefs:

Although the team was founded in 1960, it was called the Dallas Texans until 1963. But, while under that name, which shouldn’t be confused with the NFL Dallas Texans), they had a pretty good run in the AFL. They won the AFL Championship three times in 1962, 1966, and 1969. Also, they became the second team in the AFL after the New York Jets to beat an NFL team in an AFL-NFL Championship Game. Their win in 1970 was the last time the now Kansas City Chiefs appeared in and won a championship game. 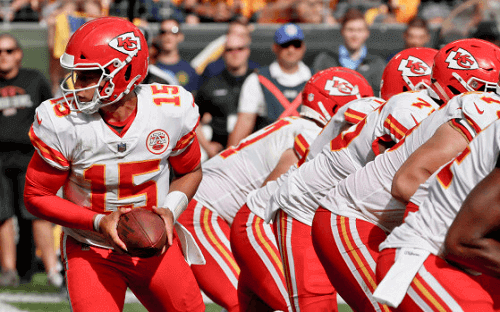 However, success for the Chiefs seems to be something that they’re still chasing. They’ve struggled to win any playoffs since. They’ve lost 12 of their last 14 playoff games. At the time, they even set the longest playoff losing streak in NFL history, losing eight games in a row. It ran from the 1993-94 AFC Championship game to the 2013-14 Divisional round.

The Kansas City Chief sport gold, red, and white as their uniform colors. While they have two mascots – Warpaint the horse and K.C. Wolf.

Betting Odds on the Chiefs

The Kansas City Chiefs have dominated their AFC sub-division three years in a row, with their winning streak beginning in 2016.

In the 2018-19 season, they lost the AFC Championship to the New England Patriots, who frankly had an excellent season that year. They went on to win the Super Bowl.

Their performance in the 2017-18 season was a bit lacklustre as they didn’t make it past the Wild card playoffs.

Lastly, in the 2016-17 season, they lost to the Pittsburgh Steelers in the Divisional playoffs.

Looking at the current trajectory of the Kansas City Chiefs, they are a sure bet for winning the AFC West division. However, anything past that and they fail to meet expectations.