They had a stint in San Diego in 1961 and were subsequently known as the San Diego Chargers. They moved back to Los Angeles as recently as 2017 with their home stadium at Dignity Health Sports Park.

The Chargers hold quite a few records for consecutive games, passing yards, and playoff appearances. Let’s find out more about the Los Angeles Chargers and the betting action around them.

For the best markets on betting on the Chargers, check out our list of sports betting sites.


What you’ll find in this Los Angeles Chargers betting guide:

Since joining the NFL, the Chargers consecutively dominated the AFC West division from 2006 to 2009. However, in 1994, they made it to the Super Bowl XXIX as the Los Angeles Chargers, they still have to prove themselves, although they did make it to the divisional playoff in 2018, losing to the New England Patriots.

Despite the changes in city, the Chargers have continually used the arc-shaped lightning bolt symbol since the team’s debut in 1960. When they made the move to LA in 2017, they unveiled a new logo which incorporate in the letters LA a lightning bolt. The logo wasn’t very popular with fans and the media, who derided it for looking like the logo for the Los Angeles Dodgers. It was scrapped after two days. Their team colors are white, navy blue, powder blue, and gold. 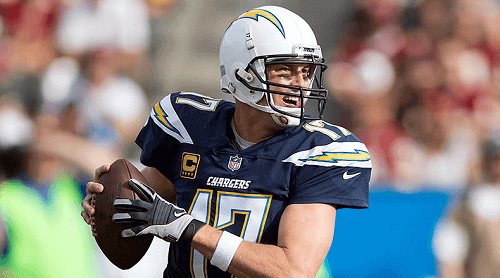 Of all the NFL teams in the AFC West, the Chargers have had the fewest playoffs appearances. Additionally, they’re also the team that hasn’t won an NFL ring.

However, the Los Angeles Chargers have been increasing in strength over the years. They inherited a franchise quarterback and one of the most expensive defense lines in the league. In the 2018 season, they managed to come second in the AFC West division, ahead of the Denver Broncos and Oakland Raiders. They were knocked out of the AFC divisional playoffs by the Patriots who went on to win that season’s Super Bowl.

They may be the underdogs of the entire NFL but they are certainly making some great strides in the AFC West division. Betting on them isn’t a sure thing – like the Patriots – but they’re not a bad choice for the coming season.