The Oakland Raiders are a National Football League (NFL) team based in Oakland, California. They play in the American Football Conference (AFC) West division along side the Chiefs, Broncos, and Chargers. The Raiders were established in 1960 and played their first season in their inaugural year in the now-defunct American Football League. This is a team that has experienced a lot throughout the founding years. From poor on-field performances to financial difficulties and low attendance, the Raiders struggled. However, in 1963, management hired head coach and eventual owner Al Davis and that turned things around. Davis consistently improved the Oakland Raiders and took them to their first postseason in 1967. Here they won their first and only AFL Championship moving to the Super Bowl II where they lost to the Green Bay Packers.

Currently, the Oakland Raiders call the RingCentral Coliseum in Oakland its home. However, the team is planning on relocating to Las Vegas, Nevada after their stadium is completed in 2020. This decision came after NFL team owners, in 2017, voted 31-1 to approve the move.

The current uniform colors are silver and black and they are represented by the Raider Rusher as their mascot.

To find the best Oakland Raiders odds for US bettors, check out our top sports betting sites below. They have been vetted by our sports betting experts and are licensed with reputable international commissions.


What you’ll find in this Oakland Raiders guide:

At a glance, the Oakland Raiders odds to win Super Bowl stand at +12500 depending which United States sports betting site you’re looking at. This puts the Raiders at number 23 out of 32 teams to win the next Super Bowl. 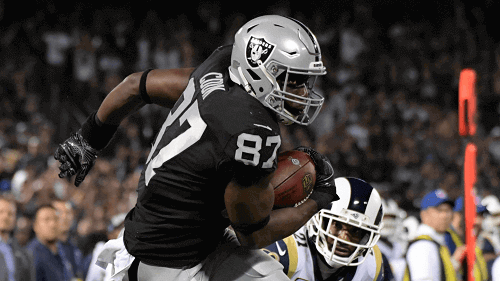 When it come to winning their respective division, which is the AFC West, their Oakland Raider odds are pegged last with the lowest of winning the division at +1200. In term of taking the AFC Championship, oddsmakers aren’t optimistic about their chances giving them +3300 odds. That put them at number 14 out of 16 teams.

Lastly, let’s take a look at their performance record throughout the years. They’ve only made it to the playoffs twice over the last 15 years. Even with the hiring of their new coach and Antonio Brown, the Raiders have failed to improve their prospects. Let’s take a look at what the years have held for this team.