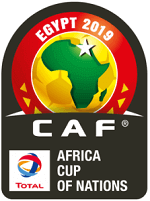 Organised by the Confederation of African Football, the African Cup of Nations (AFCON) is the highlight of men’s national soccer on the African continent. It’s the biggest and most lucrative competition for senior men’s teams. The winning country gets the bragging rights of the soccer team in Africa. The first Africa Cup of Nations tournament was held in 1957 with only three nations competing in two matches. Those three teams were Egypt, Sudan (who were the hosts), and Ethiopia. Egypt took home the trophy, after defeating Ethiopia in the finals. Today, it’s grown to feature 24 teams and takes place over a month.

Since 1968, the AFCON takes place every two years, with the most recent tournament being in 2019. Also, the number of teams competing has seen an expansion. The number grew from 16 in 2017 to 24 for the 2019 edition. Furthermore, they moved the 2019 tournament from January to June.

US bettors looking for great African Cup of Nations betting lines and odds needn’t look no further. Our top recommended sportsbooks have competitive odds on the AFCON Cup.

What you’ll find in this African Cup of Nations guide:

Leading up to the official AFCON tournament, there are the African Cup of Nations qualifiers. In this part of the tournament, 48 teams are divided into 12 groups with four teams each. They play against each other and the top two teams in each group determine the final Africa Cup of Nations fixtures.

In terms of making it into the upcoming 2019 AFCON fixtures, there appears to be clear favorites among bookies:

Check out our soccer betting guides: 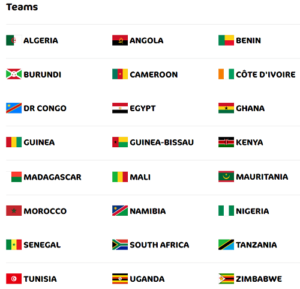 Since Egypt have automatically qualified as hosts, it’s no surprise that they’ve made it into the AFCON fixtures. Given that they’ve dominated this tournament, they could naturally be the favorites to win the tournament. Furthermore, with Mohamed Salah on their team – considered by some as one of the best soccer players in the word – this increases their odds.

Check at your our recommended sportsbooks for some of the best odds on the Africa Cup of Nations standings. Some bets that US bettors could wager on include:

Because of the nature of soccer, unlike the NFL for example, it’s a sport that more likely to end in a draw. Therefore, one way of identifying a great sportsbook is that it will have odds on this event.

The 24 teams that have made it into the final Africa Cup of Nations fixtures and their grouping are:

Americans can stake their money on lines and odds that there will be a draw. The reason why oddsmakers have created this African Cup of Nations betting line is because teams tend to draw against each other. These bets are available on bets like the money line and totals bets.

Betting on the African Cup of Nations is like betting on any other soccer or sport tournament. There are a number of fundamental principles you should consider. 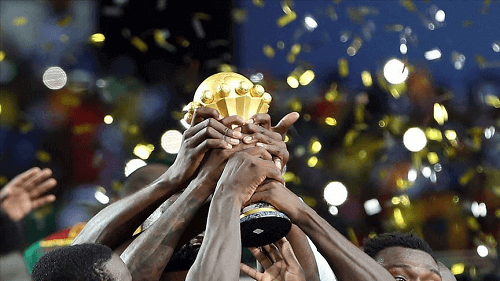 Below are some frequently asked questions about the African Cup of Nations.

Who were the recent Africa Cup of Nations winners and runners-up?

The current 2017 AFCON champions are Cameroon. They won the trophy after defeating Egypt 2-1 in the final in Libreville, Gabon.

Where is the 2019 Africa Cup of Nations?

It is running from June 21 and the final will be on July 19.

Who has won the most Africa Cup of Nations titles?

Who is the defending Africa Cup of Nations champion?

Cameroon is the defending African Cup of Nations champion. Known as the Indomitable Lions, they won in 2017 against Egypt.