In tonight’s week 8 game, it’s the Washington Redskins at Minnesota Vikings. The Redskins will be playing at the U.S. Bank Stadium in Minneapolis.

In their last game, the Redskins gave a pretty good defensive performance against the San Francisco 49ers. They managed to hold them to 9 points throughout the game. However, their offensive line fell short and failed to score any points. Adrian Peterson and Case Keenum will be back at their former home ground as they travel to Minnesota. 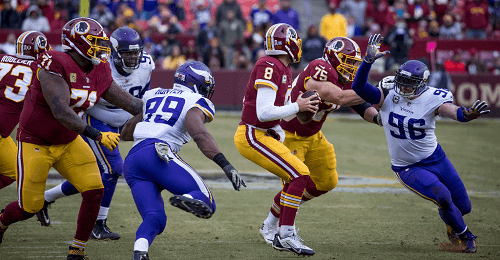 On the other hand, the Vikings are looking to extend their three-game winning streak after beating the Detroit Lions 42-30 on the road. This will be the first time Kirk Cousins will be playing against his former team.

Let’s take a look at the stats going into the Washington Vikings at Minnesota Vikings Week 8 game.

Before we gaze into the crystal ball, let’s take a look at each team and their players’ stats:

Considering the fact that Washington hasn’t scored more than 17 points in any of it’s last five games, we’re not banking on impressive scoring.

We recommend going for the Vikings and a large home spread. Keenum’s return to Minnesota just may not be enough for the Redskins to win or cover. Our final score prediction is a Vikings win and cover 35-14.

Here are the Washington Redskins at Minnesota Vikings odds from our top sports betting sites.