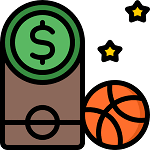 Furthermore, because of basketball’s fast action, it makes for perfect daily fantasy sports (DFS) betting. Its popularity has spread across our borders and has become a big feature in sportsbooks around the world.

In our guide, we’ll be taking a look at how it works, the contest formats, how it’s played, and some top advice from our experts.

Below are some of our top picks of the best NBA DFS betting sites in 2020.


What you’ll find in this fantasy basketball betting guide:

How Does Fantasy Basketball Work?

With fantasy basketball, it works pretty much like other fantasy sports betting. But, in this sport, your line-up of players comes from the NBA. You accumulate points based on how well they perform on the field in real life.

With NBA fantasy basketball betting, and other fantasy leagues, you’re given a salary cap which you use to recruit your eight players on each game day. Your daily basketball fantasy line-up needs to include players from at least two teams and two separate games. Also, you need to consider the following:

There are a number of paid as well free contests. Either you can play heads-up, a guaranteed prize pools (GPPs), and 50/50s.

You can track your DFS game and scores can be tracked in-play on your chosen fantasy sports betting site. Major fantasy betting sites also have apps. So, you can use the ESPN fantasy basketball app to track your team’s performance.

How are Points in NBA Fantasy Basketball Scored?

As mentioned earlier, the players in your team gets points by doing offensive and defensive actions on the court. Bear in mind that each DFS fantasy basketball has its own scoring system, so familiarize yourself with it before you start drafting.

This is a basic fantasy basketball scoring system from FanDuel.com:

In fantasy basketball, there are two league formats that determine which one you’ll play in. Bettors can choose between the standard and custom leagues. Within each of these two are several sub-categories which include positions, scoring system, rotations, and trade allowances among others.

The standard league uses the standard format but can vary in how they score the game. It can be based on wins/losses in individual categories, or average the score for the whole team in the win/loss format. The latter is rotisserie or roto betting.

Alternatively, there’s the custom league which is easier for beginners. It has a more simplified scoring system and rotations since it has more flexible slots. Furthermore, there are less stats to keep an eye on so you don’t have to keep an eye on a lot of moving parts.

How to Play Fantasy Basketball

Playing fantasy basketball is all about picking the best NBA or other league players to make up the best possible team you can. You’ll need to create a lineup of eight players to pit against another team.

Below are some top tips from our experts.

Let’s take a look at the most commonly asked questions about fantasy basketball.

Yes, there are some people who make a living playing a range of fantasy sports, including basketball. However, it’s not something everybody can do. Generally, you need to do a lot of research, sharpen your drafting skills, and play a lot. Expect to lose money before you start seeing gains.

Yes, it is legal although there are some arguing that fantasy sports should be considered gambling. Currently, the UIGEA of 2006 excluded fantasy sports betting from gambling games. Most states consider it a game of skill, therefore making it 100% legal.

No, they aren’t licensed because the law doesn’t require them to have a gambling license. However, our recommended sites have business licenses. Additionally, they’re also members of the Fantasy Sports Trade Association (FSTA), which represents operators in the fantasy sports industry in America.