NCAA college football betting is an exciting sports wagering market for US and Canadian bettors. It gives you access to a much wider selection of teams and divisions than the NFL does. You may have seen the term NCAA elsewhere. That’s because the National Collegiate Athletic Association (NCAA) is a non-profit organization that regulates student sports in North America. Another popular sport under the NCAA banner that draws in a lot of spectators and bettors as well is basketball – also known as the NCAAB. However, in this guide, we’ll be looking into the football division, more commonly known as NCAAF or just college football.

College football betting in the United States gives you access to hundreds of amateur football teams from American universities, colleges, and military academies. While college football may be a rung below professional football, the spectacle, fandom, and money pumped into it is just as much. With a history dating back to 1869, it has grown into a multi-billion-dollar business, not just from advertising but sports betting as well. Let’s take a look at what NCAA college football betting has to offer fans of sports wagering.

Below as our best recommended sportsbooks for NCAA college football betting.

What you’ll find in this NCAA college football betting guide:

Now, let’s take a look at the different NCAAF divisions and teams within them.

This is the highest league in the NCAA, with the most high-profile coaches and players in college football. Teams in the FBS are the powerhouses in college football, the elite players that are worth betting on. The colleges in this division have huge budgets and state-of-the-art facilities on par with professional-level clubs. Furthermore, they receive the same kind of TV coverage by major sports networks. Currently, there are 128 schools in the FBS.

Some college football powerhouse teams in the FBS are:

Also known as the non-principals from the FBS Division I-A, this division has a lower number of scholarships and less money for its athletes. Another difference is the number of players per team with 95 for FCS teams and 105 players for a team in the FBS. Currently, there are 125 schools participating in NCAAF division.

The powerhouse teams in the FCS are:

Considered as the intermediate level of NCAA college football, D-II is a great choice for those who don’t want the highly competitive D-I level. But don’t let that put you off the D-II, its championship game gets covered by major TV networks like ESPN and CBS. Unfortunately, teams in the D-II college football program don’t compete in the Bowl. There are currently 320 schools in this division.

The powerhouse teams in the D-II are:

The lowest division in NCAA college football is the D-III. These institutions can’t or don’t offer scholarships to its athletes. With 450 schools, this is the largest division in the NCAA. Their college football teams are divided into 43 conferences which is massive compared to the 11 in the highest levels of college football. Additionally, participants in D-III are forbidden from exchanging money for play.

College football teams in this division are: 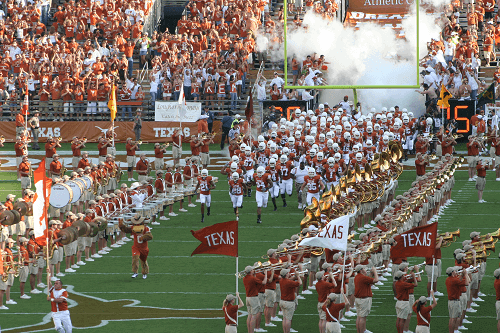 In looking at the NCAA football season, we’ll be focusing on Division I (FBS) teams. The season for NCAA college football betting is:

The College Football Playoff (CPF) was introduced in 2014 to replace the failing Bowl Championship Series (BCS). It was created to find the best two college football teams that compete in a finale. The CPF uses a traditional playoff system. Making use of a selection committee that ranks the teams, the CPF proceeds as follows:

NCAA college football betting sees some major action during postseason. This is when D-I teams compete in the Conference Championship and the Bowl Games. Let’s take a look at them below.

In terms of betting action, keep your eye on the underdog of the conferences. In these championships, they are known for causing upsets.

This is another postseason meet up where teams compete against each other at vacation-like spots, for the chance to win a trophy. Some bowls are more prestigious than others, with there being a total of 34 bowl games across the country. Let’s take a look at the top six NCAA football bowls. These represent the history of NCAA college football. 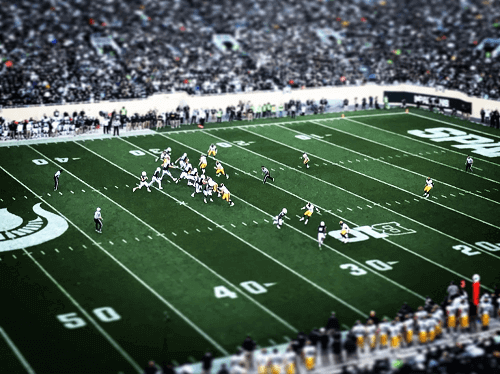 Let’s take a look at some tips and strategies for NCAA college football betting. These tips will help guide you when it comes to picking which teams to bet on (or against) when the NCAA betting lines open.

College football major match-ups draw in huge crowds both in the stadium and at college football betting lines. While being on the road comes with its own challenges, there’s also a lot of pressure to perform in front of a familiar crowd. This could make or break a player.

Only One Poll Matters

To see team rankings, the only one that US bettors should pay attention to is the CFP Committee Rankings. These decide who will make it to the playoffs and the match-up in the postseason bowl games.

Because teams in a conference play each other every single season, it’s easy to pick up on a pattern. Look at the history between those teams and who tends to win or lose. However, it sometimes doesn’t have much to do with the team’s inability to beat their opponent. Keep this in mind when picking upset bets.

In NCAA college football betting, the weather plays a huge role. Wet conditions affect how well players can grip the ball, leading to results led by the defense.

The Associated Press Top 25 is the first ranking system used for college football. It is made up of the top 25 NCAA Football Division I teams. The factors used to decide the rankings are:

It’s important to note that the AP Poll was dropped by the BCS in the 2000s. While the CFP doesn’t consider any polls when selecting postseason teams.

Also known as the Amway Coaches Poll, it still works the same way as it did in 1950. There are 62 head coaches on the panel with their rankings creating a weekly top 25 D-I programs. There have been some controversies surrounding the Coaches Poll. People have accused coaches of having bias towards their programs and conferences, among other things.

These rankings pick which four teams make it into college football’s postseason. The CFP meets at the beginning of week 8 to rank the top 25 US college football teams. At the end of the season, they pick four teams for the playoff, seed teams, and pick the match-ups for the four bowl games.

This is the only ranking that NCAA college football betting enthusiasts should pay attention to.

Check out our other guides on online sports betting: