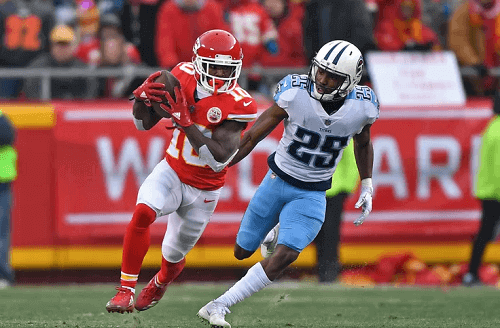 On Sunday night’s AFC Conference Championship Game, it’s the Tennessee Titans at Kansas City Chiefs. The Titans are travelling to the Arrowhead Stadium in Kansas City, Missouri with a 9-7 record. They’re coming off a 28-12 win against the Baltimore Ravens in their AFC divisional round playoff game. Running back Derrick Henry has become quite the force in Tennessee. He’s led the NFL in rushing during the regular season and rushed for 195 yards in their game against Baltimore.

In this postseason, Tennessee Titans quarterback Ryan Tannehill has thrown for 160 yards, made three touchdowns, and one interception. In the Titans’ two playoff games, he’s had to throw only 29 passes. Henry has been a boon in the backfield, rushing for 377 yards with an average of 5.9 yards per carry, and made one touchdown. Leading receiver Kalif Raymond has one reception for 45 yards and one touchdown.

On the other side of the field, the home team Kansas City Chiefs have a 12-4 record. They are also coming off a victory against the Houston Texans, coming from behind to win 51-31 in their AFC divisional playoff. Quarterback Patrick Mahomes led the Chiefs to victory with 320 yards passing and five touchdowns. He was particularly lethal against the Texans with 53 yards on seven carries. Mahomes has also been leading with rushing in the postseason with 53 yards, while Kansas running back Damien Williams rushed for 47 yards and made two touchdowns. Leading receiver in the Chiefs is Travis Kelce who has 10 receptions for 134 yards and made three touchdowns.

Let’s take a look at how each team has been doing in terms of stats before we make our pick.

Both teams are at the top of their game currently, and the last time they played each other was in Week 10 of the NFL. The Titans walked away the winner. However, it was a very close game with a final score at 35-32. But now the Chiefs have been proving themselves unstoppable with a decisive win against the Texans (although it first looked like they were doomed).

The combo of Mahomes and Kelce on offense made a huge difference for the Chiefs in Sunday’s game against the Texans. We think that they will make it difficult for Tennessee, especially if they continue with their one-dimensional running game.

Catch highlights of the Week 10 NFL game where the Tennessee Titans beat the Kansas City Chiefs 32-35.

Place your bets on the Tennessee Titans at Kansas City Chiefs at our top sportsbooks.