Tennis is one of the world’s most popular sports, and tennis betting is increasing in popularity especially in the USA. More and more people are getting in on the action, with the sport generating nearly as much money as soccer and horse racing in the UK, for example. The game is fast-paced, the dominating players tend to change with more frequency than in other sports, and offers a wide array of markets and tournaments throughout the year.

Believed to have it origins in 12th century Europe when monks in France and Italy played a game of jeu de paume (game of the hand) when they smacked balls with their bare hands. The precursor to the modern version of the game was enjoyed by King Louis X and King Charles V of France, and King Henry VIII of England. King Henry took the game very seriously, even building the Royal Palace of Hampton Court which still exists today.

Then, with the rise of the grass court, modern tennis was being developed. While Major Charles Wingfield is credited with the modern game we enjoy today. Additionally, in 1874, Wingfield patented the equipment and rules of the game.

Best US Sportsbooks for Tennis Betting

Find the top sports betting sites for the best US tennis betting odds below.

What you’ll find in this tennis betting guide:

Tennis betting odds are available on nearly every betting market. They’re also found on just about any tennis match being played in America and around the world. Keeping in mind the basics of tennis betting, we’ll be taking a look at the most common tennis betting lines you can wager on.

Growing in popularity thanks to its exciting fast-paced action, in-play is about placing bets as the match is being played. US bettors can bet on events as they happen like who will take the next set, or who will hit the next ace.

Similar to spread betting in other sports, tennis handicap is the equivalent. Tennis spreads are divided into two – game handicaps and set handicaps.

This is tennis betting’s version of money line betting. Here a bettor wagers on who will win the single match on that day.

Finally, there’s outright tennis betting. Similar to futures bets in other sports, bettors will be predicting who wins the tournament. This betting market is usually open before the tournament starts. 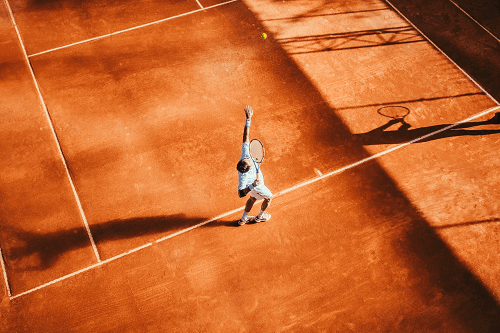 How to Bet on Tennis

To become adept at tennis betting, you’ll need to know how to bet on tennis. Let’s take a look at some basic steps below:

Even though tennis may seem like any other sport, there are certain aspects you need to consider when betting on a player or a match. Our expert tennis bettors have compiled a list of tips to keep in mind:

Check out our other sports betting guides:

Let’s take a look at tennis betting and the industry’s biggest tournaments.

The opening grand slam of the year, the Australian Open is takes place on the hardcourt in Melbourne Park, Melbourne. The tournament takes place in mid-January. The first one was played in 1905 and was designated a grand slam tournament in 1924. To date Serena Williams is the most successful women’s singles player in the Australian Open with seven wins. Novak Djokovic is the leading men’s singles player, winning it six times.

From end of May until early June each year, the French Open is the Championnats Internationaux de France de tennis. Also known as the Roland Garros, it’s played on a clay court at the Stade Roland-Garros. Playing on clay provides a much tougher condition resulting in longer rallies and plays from behind the baseline. Rafael Nadal has dominated the French Open, to date he’s won the tournament 11 times.

One of the most popular grand slams of the year, the US Open is played on the Billie Jean King National Tennis Center in Flushing Meadows, New York. It starts on the last Monday of August. Founded in 1881, it’s one of tennis’ oldest tournaments still being played. It was first played in New Port and then moved to the hardcourts of the Billie Jean King Center 1978. Additionally, it is known as the grand slam with the largest prize money on offer. Jimmy Connors, Roger Federer, and Pete Sampras all hold the title of most men’s singles win with five titles each. Chris Evert and Serena Williams hold the record for women’s singles win with six titles each.

Thought of as the ultimate tennis tournament by both fans and players, it’s also the oldest tournament in the world. It was first held in 1877 at the All England Lawn Tennis and Croquet Club in Wimbledon, London. Beginning on the first Monday in July, it’s the only grand slam played on grass. The women’s trophy is known as the Venus Rosewater Dish while the men’s trophy is the Gentlemen’s Singles Trophy. Roger Federer has won the most men’s singles with eight titles. Martina Navratilova has won the most women’s singles titles with nine titles.

This tournament is considered the World Cup of tennis with players representing their home countries. Held annually, the Davis Cup is the men’s game and the Fed Cup is the women’s game. There’s a qualification round and then it moves to a top 16 round where 16 teams play in four rounds eventually leading up to the finals. Each tie is played in a best-of-five format over two days for the Fed Cup and three days for the Davis Cup.

Officially recognized as an Olympic sport in 1896, it became a permanent feature in the tournament in 1988. There are five tennis events at the Olympics – men’s singles, women’s singles, men’s doubles, women’s doubles, and mixed doubles. Olympic tennis games are usually held on hardcourts but this varies depending on the host country. The top Olympic tennis player is Venus Williams with four gold medals and one silver medals.