CFL Betting: A Guide for US Bettors

The CFL, which stands for the Canadian Football League, has some major betting potential for American bettors. Once the NFL and NCAAF seasons are done, there’s some what of a football action void left in the summer. If you’re looking for great football betting lines, the CFL offers excellent lines. It is the football league of elite teams in Canada and it’s similar to our football but with a few differences. We’ll take a look at those in our CFL guide later below. Canadian football is the country’s second most popular sports after hockey. Tensions are high, the fans are loud and loyal, and their championship – the Grey Cup – is one of their most watched sporting events in the year.

Our neighbour’s version of football evolved from rugby, which they played in Canada from around the 1860s. By the time they had the Grey Cup in 1909, their version of rugby had picked up many similarities to American football. The CFL Canada was officially founded in 1958 after merging Canada’s two major rugby unions. These created the Eastern Conference (the Interprovincial Rugby Football Union – IRFU) and the Western Conference (the Western Interprovincial Football Union – WIFU) CFL divisions.

What you’ll find in this CFL guide:

How Does the CFL Work?

As we mentioned earlier, the CFL has some rule differences to American football. From the number of CFL divisions, to how many players in a team and football field, it is as familiar to US bettors as it is different. If you want to become knowledgeable at CFL betting, here are some key differences that you should know.

In comparing Canadian football to American football, let’s take a look at the CFL vs NFL.

The teams in the Canadian league play 18 games during the 21-week regular season, which is from mid-June to early November. Additionally, they also have three bye weeks for them to recuperate.

After the regular season, six CFL teams move into the three-week divisional playoffs in November. These six teams are the top teams in the Eastern Conference and Western Conference divisions.

In week one, they play the division semi-finals:

Week two of the playoffs, teams play for the CFL divisions West and East championships:

The final week three, teams play for the Grey Cup:

The Grey Cup is the CFL’s equivalent of the NFL’s Super Bowl. It is always played on the last Sunday of November at a stadium chosen two years in advance. They also present Most Outstanding Player and Most Outstanding Defensive Player during the festivities. Additionally, they award a Grey Cup MVP and Grey Cup Most Valuable Canadian.

As you can imagine, CFL betting action is high during this season, with bettors wagering on how the playoffs will go, who will win the cup, and who will get MVP.

CFL betting lines are a lucrative market for not only Canadians, but anyone interested in betting on Canadian football. There are a number of CFL betting lines and trends available at sports betting sites. Let’s take a look at the most popular CFL football betting lines.

The most popular bet type for Canadian Football League bettors, the sportsbook gives the favorites to win a negative handicap while the underdog a positive handicap.

This bet is pretty simple to make. You wager on who will be the winner or the loser of a match.

An over/under bet involves betting on whether the total points scored in a game will be less or more. The set number you wager will be over or under is set by the sportsbook.

Here you can wager on which team will get off to a flying start.

CFL betting likes to predict who will score first in the game. Generally, this is more of a novelty prop bet than a serious prediction.

This bet is about predicting who will be leading the scoreboard at half-time and full-time. The possible combinations are:

You select which team you want to win and the range of points they’ll win by. 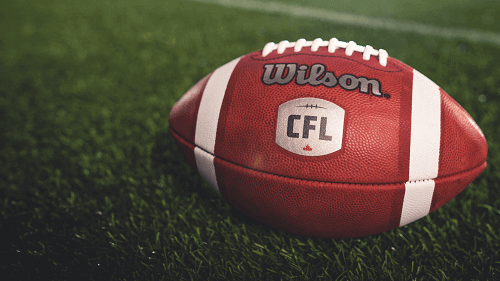 How Many Teams are in the CFL?

Compared to the NFL, there are relatively fewer teams in the league divided up into two divisions. Let’s take a look at the nine CFL teams below.

In the Eastern Conference, there are four teams:

In the CFL Western Conference, there are five teams: