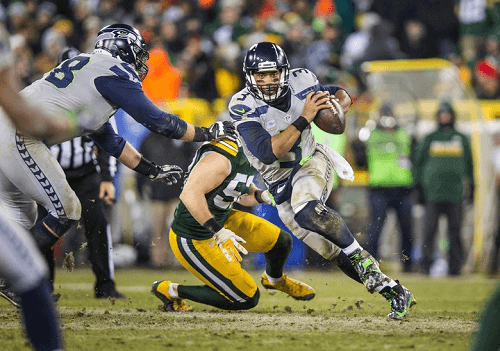 In the first of two NFC divisional playoffs, it’s the Seattle Seahawks at Green Bay Packers. Seattle travels to Lambeau Field, Wisconsin with an 11-5 record and are coming off a 17-9 win against the Philadelphia Eagles.

Rookie receiver DK Metcalf led the Seahawks in terms of receiving yards, with 160 in the game. As always, quarterback Russell Wilson led all the rushers with 45 yards. The defensive line did well, keeping the Eagles out of the end zone and conceded only three field goals.

On the other side of the field, the Green Bay Packers are coming into this playoff with a 13-3 record on the season and are the NFC North champions. They are well rested as the Packers earned a bye in the first round of the playoffs.

In their regular season, quarterback Aaron Rodgers threw for 4,002 yards, made 26 touchdowns, and four interceptions. He also leads the Packers running backs with 1,084 rushing yards and 16 touchdowns. Davante Adams is Green Bay’s leading receiver with 997 yards and five touchdowns to his name. In terms of tackles, Blake Martinez leads the Packers with 155.

Let’s take a look at some key team stats to get a sense of how each team is performing.

Before we make our predictions for the Seattle Seahawks at Green Bay Packers game, let’s take a look at some postseason stats.

Currently, the Packers don’t have any postseason statistics as they’re coming off a bye week.

The Seahawks have been doing quite well on the road, winning eight of its last nine road games this season. Green Bay struggles with putting points on the board and Seattle’s defense is pretty strong, coming up big against Philadelphia. If the Packers can get the ball in Rodgers’ hands, we suspect he’ll struggle to get through.

Watch highlights from the last time the Seahawks played the Packers back in the 2018-19 season.

Get the Best Odds Here


Find more of the latest sports odds here at BestUSSportsBetting.com.