Steelers Win Against a Hapless Bengals

The Steelers win against the Bengals marks the Pittsburgh team’s first win of the NFL season. Led by Mason Rudolph, the Pittsburgh Steelers recorded a 27-3 victory against Cincinnati on Monday night.

Playing at on the Steelers’ home ground, Heinz Field, both clubs were slow to start the game. But Pittsburgh was able to make some gains offensively. This was thanks in part to running backs James Conner and Jaylen Samuel. Additionally, Rudolph was an efficient quarterback, scoring two touchdowns and completing 24 of 28 throws for 299 yards. Some sports pundits have even speculated that he could be the possible heir to Ben Roethlisberger’s throne.

On the other hand, it seems like the Cincinnati Bengals couldn’t handle the Steelers’ front seven. They seemed to torment their quarterback Andy Dalton throughout the game. Furthermore, it’s the main reason why the Bengals are still chasing that elusive first win of the season.

Let’s take a look at how the Steelers won and why the Bengals lost. 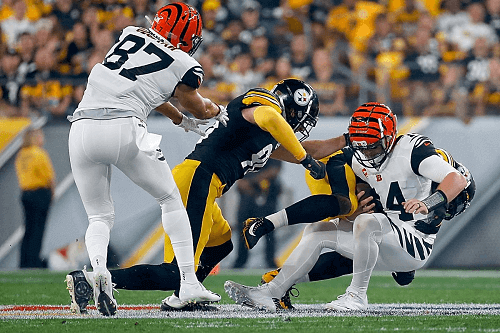 Steelers Win Because of a Daring Offense and Solid Defense

Quarterback Rudolph didn’t have to do too much under center. Furthermore, he also didn’t take too many deep shots, relying on the running game early. The addition of Samuel in the starting line made a huge difference to Pittsburgh’s performance. On Monday, he managed a 26-yard rush and caught all eight of his targets for 57 yards. Additionally, Samuel proved an asset as he was used heavily across the field. Furthermore, using Samuel out of the wildcat resulted in his lone rushing touchdown of the night.

Pittsburgh Steelers’ head coach Mike Tomlin also made a good call letting Rudolph take a chance downfield. This resulted in a dagger touchdown to rookie Diontae Johnson, which really put the Steelers out of reach for the Bengals.

Defensively, the Steelers wouldn’t give Bengals quarterback Dalton any space throughout the night. This resulted in eight sacks and 12 total quarterback hits. Furthermore, the Steelers’ defense could create an opportune turnover. Led by outside linebacker Bud Dupree, the turnover happened just over five minutes into the second quarter. And, at the time, Cincinnati was only down four points, so it was a deflating fumble after the Bengals traveled 46-yards on the drive. After this, it was a no contest, securing the Pittsburgh Steelers win.

Bengals Lose Because of Stagnant Offense

Because the Cincinnati Bengals couldn’t protect their quarterback Dalton, their offense became stagnant. The eight sacks Dalton experienced were the most he’d taken in his career.

Furthermore, the Bengals couldn’t take advantage of good field position early. They had two chances – when Johnson fumbled in the first quarter but only came up with three points and when they couldn’t move the ball move than a yard going three-and-out. Unsuccessful quick drives seemed to be the theme of the Bengals’ night. Three of their 10 offensive drives were three-and-out while seven of them were a punt or a turnover.

So, the Cincinnati Bengals move into Week 4 with 0-4-0 while Pittsburgh Steelers have 1-3-0. The Steelers will stay in the division this week as they try to claim another victory against the Baltimore Ravens in another home game. On the other hand, the Bengals need to go back to the drawing board and find a solid game plan for their match against the Arizona Cardinals at home.

For more sports news, follow our US sports news blog at BestUSSportsBetting.com.