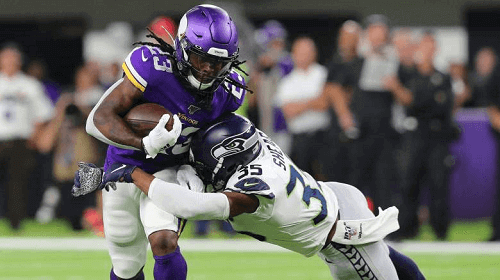 In Monday Night Football, it’s the Minnesota Vikings at Seattle Seahawks. Both teams are looking to win this match to keep the pace with their respective division leading teams.

The Minnesota Vikings are coming to CenturyLink Field in Seattle, Washington with an 8-3 record and are in second place behind the Green Bay Packers in the NFC North. In their last game against the Denver Broncos, the Vikings managed to secure a 27-23 win after being down 20-0 at halftime. This feat was the first time in five years that a team trailing by 20 points or more at halftime came back and secured a win. They managed to score four touchdowns from their possessions.

Vikings quarterback Kirk Cousins led them to victory, going into a two-minute offense, completing 29 of 35 passes for 319 yards and scoring three of the four touchdowns. Minnesota wide receiver Stefon Diggs caught at least five passes and recorded five receptions for 121 yards and a touchdown. Meanwhile, Kyle Rudolph also had five catches for 67 yards and a score.

The Seattle Seahawks are also looking to win this game to keep up with the San Francisco 49ers in the NFC West division. In their most recent game, the Seahawks also recorded a win against the Philadelphia Eagles, beating them 17-9. The star of that game was Seattle’s defense. Running back Rashaad Penny carried the ball 14 times for 129 yards, scoring a touchdown as well. And of course, quarterback Russell Wilson kept the team’s momentum, completing 13 of 25 passes for 200 yards with a touchdown and an interception. However, he was sacked six times.

Let’s look at each team’s stats so far in the NFL.

Before we give our pick and predictions, let’s look at some key metrics for each team:

So, who do we think will win this game? Well, both teams are 6-5 against the spread this season and both have a good record. Seattle’s offense has the ability to win but its defense may allow in too many goals in such an important game. However, the Vikings have a poor record when it comes to playing in Seattle with a 2-7 all-time record. With two evenly matched teams when it comes to the numbers, we’re going with the Seattle Seahawks.

For more of the latest US sports news, keep it here at BestUSSportsBetting.com.
Our Score
Our Reader Score
[Total: 13 Average: 3.6]