The historic Saratoga race track is a thoroughbred racecourse in Saratoga Springs, New York. Affectionately known as the Spa, it was opened in 1863 and hold the title of being the fourth oldest race track in America. It is a 50,000-capacity venue that draws in people from all over the world.

When the Saratoga race track was first opened, it was used for standardbred racing from 1847 until 1863. It was when congressman and casino operator John Morrissey organized the tracks first thoroughbred race card in 1863 that the Saratoga became the premier racecourse Americans know and love. It’s made up of three distinct tracks:

The flat racetrack was rated as the number 10 sports venue of the 20th century by Sports Illustrated in 1999.

The Saratoga racetrack is famously known as the House of Upsets because of the high number of famous horses losing at this track. Some the most notable ones include:

What you’ll find in this Saratoga race track guide:

Races at the Saratoga take place from July to September on Labor Day. The Saratoga race schedule has events take place five days a week all week. Some of the most noteworthy Saratoga horse racing events that take place are: 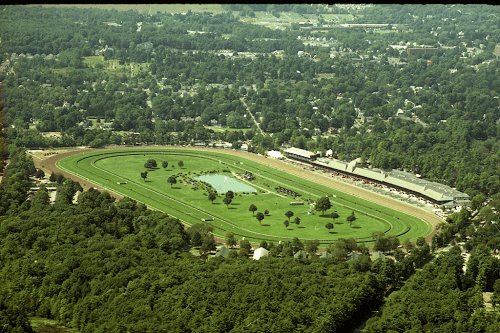 Knowing how to pick a horse is a very important aspect of horse racing betting. It requires a lot more than just picking your favorite color or horse name. Here are some good approaches to consider:

Read our guides on the most popular racetracks in America below:

Let’s take a look at the different types of Saratoga bets US bettors can place on what the Saratoga race results will be.

Bets Within a Saratoga Race

Boxing makes wagers more expensive at the racebook. However, it increases your chances of winning the bet.

These types of bets are known as picks.