Known as one of the most elusive titles in the sporting world, the Triple Crown separates the elite horses from the others. Triple Crown betting attracts both seasoned and novice bettors from across America. Betting on who will take this title is very popular in the US as the Kentucky Derby, Preakness Stakes, and Belmont Stakes are races every bettor wants to win. They are lucrative and can make you instantly rich. Betting on the title winner brings in more than $300 million every year. 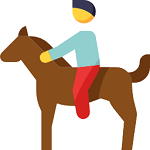 For horse breeders, the US Triple Crown of Thoroughbred Racing is the highpoint of American horse racing. Open only to three-year old horses, they have only one shot in their lifetime to take the Triple Crown and become a legend. To win it, the horse must run three Grade 1 races in five weeks at three different dirt racetracks.

In our horse racing Triple Crown betting guide, we’ll take you through the top betting sites, the three races that result in the Triple Crown winner, the bets you can place, as well as provide tips. Additionally, we’ll also take a look at the history of winners and the title itself.


What you’ll find in this Triple Crown betting guide:

What are the Triple Crown Races?

Horse racing Triple Crown is consists of three races that are run in a space of five weeks. They take place on diverse types of racecourses with different stakes over different distances. These weed out the strongest thoroughbred horse from the rest. There are only two constants between all three races: only three-year-olds can run and it’s on a dirt track.

Run on the first Saturday of May, the Kentucky Derby takes place at the Churchill Downs Racecourse in Louisville, Kentucky. The racetrack is 1 ¼ mile long dirt oval and it’s known as The Run for the Roses because the winner is get a blanket of roses at the end. Only 20 runners compete in the race. They select the horses through the Road to the Kentucky Derby circuit in Europe, Japan, UK, and US. The Kentucky Purse is $2 million.

The next race in the run up to the end of the Triple Crown series action is the Preakness Stakes. This is run on the third Saturday of May at the Pimlico Racecourse in Baltimore, Maryland. It’s a 1-mile dirt oval and this one is known as The Run for the Black-Eyed Susans because the winner is draped with a blanket of these flowers. The number of runners has been cut down to 14 – those that earned purse money in the Kentucky Derby and those that got some of the prize money.

The third race in the series; this one is run at Belmont Park Racecourse in Elmont, New York. The Belmont Stakes take place on the first or second Saturday in June. The longest of all three races, this course is 1 ½ miles long and aptly dubbed The Test of the Champion. Here the winner is draped in carnations. This race only has 16 runners. Those guaranteed a spot in the line-up are the ones that earned purse money in the Kentucky or Maryland races. Lastly, the rest are given places based on total prize money.

See our guides on important US horse races:

It has a variety of markets available to bettors both in the US and abroad. As previously mentioned, the Triple Crown is an exciting series to watch. With more than $300 million to be won each year in America alone, you can bet in the following markets:

The exotic bets markets are also open like the: 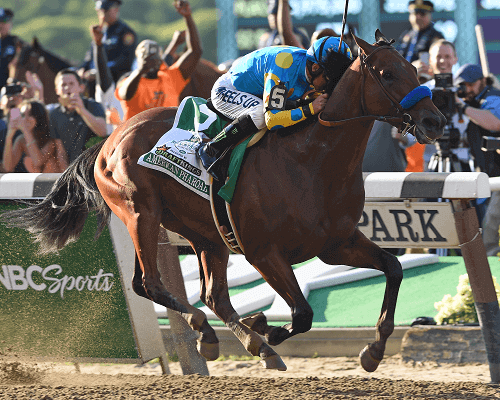 Most Triple Crown betting is focused on each individual race. For some betting tips, we asked our experts on what they would recommend. This is what they told us:

In the whole history of the Triple Crown, there have only been 13 horses who’ve won it. The first being Sir Barton in 1919.

Triple Crown betting is as elusive as winning the title. Here’s to hoping this year’s contenders are up to the challenge.