In one of tonight’s NHL fixtures, it’s Tampa Bay Lightning at Boston Bruins. Tampa Bay will be traveling to the TD Garden in Boston, Massachusetts in an Eastern Conference match up. They head there with a 3-2-1 record while the Bruins’ record looks better at 5-1-0.

However, it looks like Tampa Bay Lightning is comfortable on the road. They played their sixth game away from home on Tuesday. They managed to beat the Montreal Canadiens 3-1. Captain Steven Stamkos had a big game for the Lightning, scoring 1 goal and gaining an assist. Additionally, center Tyler Johnson and defenseman Braydon Coburn contributed one goal each. 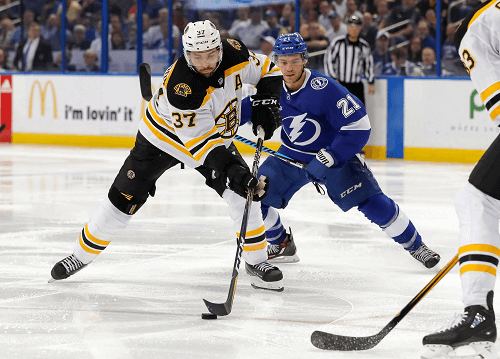 On the other hand, their game was fairly weak when it comes to shots taken where the Canadiens dominated 34-22. They were also dominated in the faceoff circle with a 30-20 overall. But it seems like Tampa Lightning had a solid defense in keeping the Montreal Canadiens by limiting them to 1 goal in 34 shots.

Looking at the Bruins, they are also coming into this game with a win after playing the Anaheim Ducks at home. In their 4-2 victory, right winger David Pastrnak scored all 4 goals. Defenseman Troy Krug and left-wing Brad Marchand each recorded 2 assists. However, the Boston Bruins were dominated in when it came to shots 32-23. But much like the Lightning, the Bruins limited the Ducks offense to 2 goals in 32 shots. And in the faceoff circle, the Bruins and Ducks were even at 29-29.

In order to make an accurate prediction, we have to look at some key stats of both teams coming into the match:

So, the Lightning was one of the best teams in the NHL last year but have failed to live up to their previous stellar performance. On the other hand, the Bruins are showing why they’re one of the best teams in the Eastern Conference. Also, they have a roster of players that know how to get the puck in the back of the net – Brad Marchand and David Pastrnak we’re looking at you. As a duo, they have a combined 19 points in 6 games.

Here’s what our top sportsbooks have to say about tonight’s match.


Check our other sports predictions and picks:
Our Score
Our Reader Score
[Total: 13 Average: 3.6]