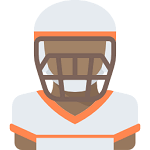 Then in 2002 and 2016, there were re-alignments of the NFL NFC West which resulted in the division that we have today. For the first time in its history, all the NFC West teams are found west of the Rocky Mountains. Let’s take a further look into the NFC West division, its teams, and their standings against each other. We’ll also be looking at the betting odds for the different teams in the division. US bettors hoping to wager on the teams’ odds of winning the NFC championship should pay attention to these.

Here are some of our top recommended NFC West sports betting sites. You’ll find some of the best odds for American bettors wagering on the NFL.

What you’ll find in this NFC West betting guide:

Following the standard alignment of teams in the NFL, the NFC West division is made up of four teams which are grouped geographically. The teams are in states that border the west coast of the United States of America. The four west coast teams are: 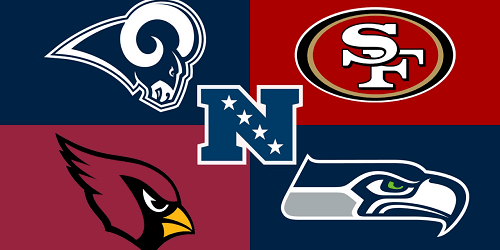 There is a long-standing rivalry between the Rams and the 49ers which has existed since 1950. In 2010, the NFC West division became the first in NFL history to have a champion with a losing record. This was when the Seattle Seahawks became NFC champions with a record of 7-9. In terms of division champions overall, the 49ers hold the most NFC West titles, winning it 19 times.

Going into the playoffs, the current NFC West standings are:

Now, let’s take a look at the betting odds on each of the division’s teams. Historically, the 49ers have dominated the division but the Seahawks have emerged as kings of the NFC West. They’ve won eight of the 14 times they’ve made it to the finals since 2004. However, the Rams have been leading in the current NFC West standings, winning the 2018 season. They managed to break a drought from 2003 in 2017, which was the longest period of loss of a team in the division. 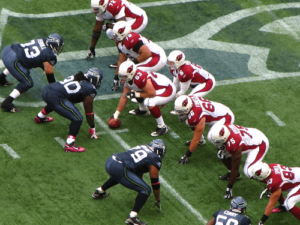 Odds of winning are at +1600, depending on your sportsbook.

The Cardinals were plagued with injuries to their offense line in past seasons, preventing them from scoring. However, even though it isn’t given credit, their defense line was pretty impressive, and was the most underrated in the NFL. Furthermore, there a heightened expectation for the Cardinals is the return of David Johnson, arguably one of the best RBs in professional football. 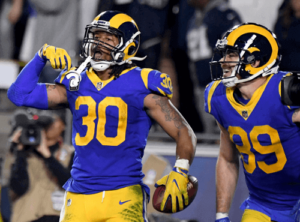 Odds for the Rams are at -160, depending on your sports betting site.

Bookmakers aren’t that convinced that the Rams will pull of another NFC West win. However, bettors are worried about having a young talented team with big personalities. Will they be able to keep it together to get as far as they possibly can? It seems like the Rams have the best coaching staff to handle all of the star players. 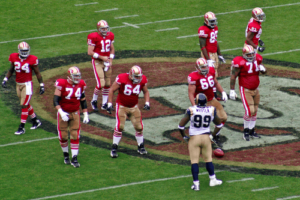 The San Francisco 49ers have a good offensive line but it could be better. While their receiving line leave something to be desired. Furthermore, their defense isn’t also the greatest, being ranked 24th in 2017. They chose to improve their offensive line but left their defensive line unchanged. However attractive the individual pieces are for betting on the 49ers, there are some areas where they’re lacking. Some tipsters believe that the 49ers are being overvalued by oddsmakers. 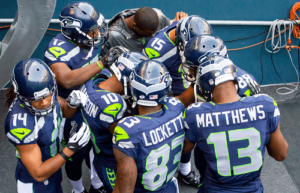 Odds of winning the NFC West championship are at +450.

The Seahawks have Russell Wilson to thank because he single-handedly carried the team to competency over the past few seasons. The Seattle Seahawks have a crumbling offensive line which could be the worst in the NFL. Additionally, they’ve made some questionable draft choices and no impact players for their offseason. There seems to be little on the Seahawks’ roster that inspires confidence.

See our guides on the other NFC divisions: